With its 1,100m central span the 3,100m Russky Island Bridge will ultimately be the world’s longest and tallest cable-stayed bridge. Traversing the Eastern Bosphorus, it will link the far east port of Vladivostok with Russky Island, which belongs to the city. The Russian building contractor, SK MOST, is aiming for a record-breaking construction period of just 43 months so that the bridge’s four-lane road is open in time for the Asia-Pacific Economic Cooperation summit at the end of 2012.

Our Russian affiliate has provided Self-Climbing Formwork (SCF) which is now helping ensure quick and safe access during the construction of a 320m tall pylon for the world’s longest cable-stayed bridge. The solution provides a fully enclosed temporary working environment which protects against extreme weather conditions during construction of the pylon and its 70m tall approach piers, which together form part of the record-breaking Russky Island Bridge at Vladivostok in Russia. 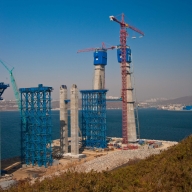