Built in the early 20th century, Brisbane City Hall is one of the city’s iconic structures. A 2008 engineering report revealed multiple structural & safety issues that required urgent major repairs to save the historic landmark. In 2010 the building was closed and principal contractor Abigroup moved in to begin the $A220 million, 3 year restoration project.

Abigroup engaged our Australian affiliate to manage a comprehensive range of scaffolding applications both inside and outside the structure. The building’s heritage status required close consultation with not only the principal contractor, but also the Brisbane City Council, architects, structural engineers and even archaeologists. Our Kwikstage modular scaffolding was used in areas ranging from external access to a 25,000 m³ birdcage in the main auditorium. Scaffold design and installation was made even more challenging due to a total ban on tie points into the building’s timber and sandstone structure. 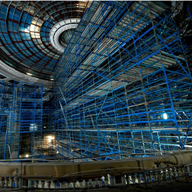